And Other of Gurdjieff’s Writings

Perspectives on Beelzebub’s Tales is a collection of essays offering new perspectives on Gurdjieff’s concepts of Kesdjan and higher being-bodies, Kundabuffer, the enneagram, involutional and evolutional law, perpetual motion, and ‘hydrogens’ relative to the scientific discoveries since Gurdjieff’s death.

Dr. Keith Buzzell’s first book, of what has become a remarkable body of work composed of five volumes with more to come, lays an intricate, reliable and vast foundation of inquiry into the inner and outer world of man according to the teaching and writings of G.I. Gurdjieff. Dr. Buzzell draws upon his wide knowledge and practice in the fields of medicine, evolutional biology, cosmology, physics, biological and chemical science, blended with his personal experience as a sincere and virtually lifelong student of Gurdjieff’s teaching to, as Gurdjieff asks us, “fathom the gist” of Beelzebub’s Tales to His Grandson. Dr. Buzzell shares his “fathoming” into all aspects of the teaching.

In the first chapter, the lawful, enneagramatic structure of Beelzebub’s Tales is examined, opening the way to ‘hunting’ for the presence of cosmic law governing all and everything. From this first note, Buzzell delves into many of the images as presented in Beelzebub’s Tales: the sources of conviction; the “accursed” organ Kundabuffer which leads into a completely new look at perpetual motion; the role of higher “prepared” law as embodied in the angel Looisos; involutional and evolutional law–to name a few.

Chapter 9, “Gurdjieff’s ‘hydrogens’” is a key chapter; it lays out the organizing principle through which future concepts and ideas are approached. It bridges the concept of Gurdjieff’s Ray of Creation, the hierarchy of Worlds, the enneagramatic journey from non-mass to mass, with the extraordinary scientific discoveries in quantum physics.

The book closes with an introduction of Gurdjieff’s concept of Reason through the development of the brains (physical, feeling and thinking) and the role of Attention in the possibility of building Higher Bodies. This exploration deepens with each subsequent book by the author.

It is highly recommended to give the Appendix a thorough look. It walks the reader through the author’s development of a symbol (referred to as A Symbol of the Cosmos and Its Laws) which will appear over and over again as an essential tool to enter into a question: from the  microscopic world to macroscopic world.

Would be happy to help, Michael. Can you be more specific as to what you wish to have clarified please? 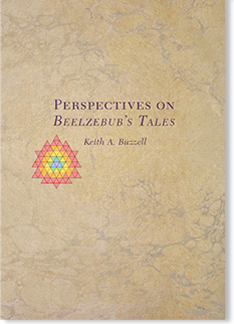 Announcing the re-publication of Perspectives on Beelzebub’s Tales, by Keith Buzzell. This second edition features a new full color cover and enhanced illustrations, as well as a new addition to the appendix and errata corrections.