Gurdjieff’s expression “active mentation” is one of the many expressions in Beelzebub’s Tales that serve as a shock to our usual way of thinking and feeling. In this expression is an indication of an action involving the whole of our being: equal-degree functioning of our thinking, feeling and moving parts. In this volume, Explorations in Active Mentation, Keith Buzzell is a living example of this new concept, in his on-going quest to “fathom the gist” of Gurdjieff’s writings and teaching.

He approaches notions from Beelzebub’s Tales, such as hypnotism; justice; faith, hope and love; the lawful relationship between being and becoming; the transformational influence of the mind on our brains; the resonance of Gurdjieff’s myth of Creation to the possibility of an inner creation, with the full commitment of the entirety of his faculties to strive to comprehend and incorporate what Gurdjieff is trying to tell us in his writings––all under the organizing principle of Law and its manifestation from the highest World to our own World, as imaged in the author’s elaboration of A Symbol of the Cosmos and Its Laws. As in his other volumes, illustrations of clarity and beauty abound.

An effort such as this obligatorily involves a substantial participation from the reader––we are asked to stretch and maybe even sweat a little. In doing so, we may come infinitesimally closer to actualizing Gurdjieff’s wish:

“Only then will you be able to count upon forming your own impartial judgment, proper to yourself alone, on my writings. And only then can my hope be actualized that according to your understanding you will obtain the specific benefit for yourself which I anticipate, and which I wish for you with all my being.” 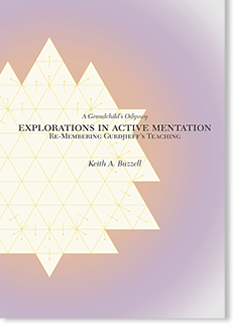