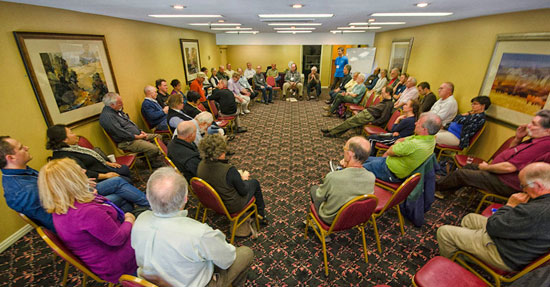 Keith Buzzell and the Fifth Press staff were present at the All and Everything Humanities Conference 2012, in Salt Lake City. Keith presented a paper from Reflections on Gurdjieff’s Whim, The Dilemma of the Toof-Nef-Tef. Below is a report from Debbie Elliott.

My first A & E conference & the 17th to be held, this year was in Salt Lake City, Utah. Coming from London meant a long flight so I came a couple of weeks earlier to get over the jet lag and see the surrounding area.

The conference was held at the grand old Peery Hotel, proper cowboy style decor. The A & E planning committee were very welcoming & started the proceedings with a getting to know you session. Since this was my first time I was a little shy & then dismayed to see I was 4th in line to speak! I tried not to rush through my intro & to pay attention to all the names & info each individual gave, there were just under 60 of us. Attention was needed from the start & as a subject attention was brought up in many of the talks.

The first talk was from Will Mesa who was very knowledgeable about Beelzebub’s Tales to His Grandson, or the living teaching as he remarked. I was surprised to learn that Ouspensky never read BTTHG, apparently it got stuck in his throat.

In the evening there was a reading from BTTHG, I think we started on chap 9 & those who wished to read aloud were directed to stick to a page each. People were allowed to make a comment on anything that the page just read meant to them. Again the cat got my tongue but there were many others with observations. All remarks were treated as important & all opinions valid.

A room was set aside each morning from 7-8 am for sitting, unguided. The day before Will Mesa told everybody how Dushka had told him that meditations should be unguided & so this became a bit of a running joke anytime a sitting or meditation was mentioned . . . guided or unguided?

Derek Sinko was the first speaker of the day with a colourful talk on visualising BTTHG & the colours that Gurdjieff uses in the book.  A great discussion came out of this about how humans used to see more colours than they do now (i.e. octarine for Pratchett fans!); being sight-being-able to see more than ordinary sight, & to recognise other colours.

Keith Buzzell was next to talk about Toof-Nef-Tef, the king of Mars. Keith has been writing some excellent works on BTTHG & this was a pleasing talk on chapter 45 which I am glad to say I had read again in the break. Toof-Nef-Tef is concerned with why the Martians were having difficulty in perfecting themselves, something we are all having difficulty doing today here on planet Earth.

The afternoon was a seminar on chapter 34 “Russia,” some short extracts were read inbetween a good debate on the meanings within this chapter.

The evening was a magical night as Steffan Soule put on a fabulous show of card tricks & illusions with crowd participation which brought humour & fun hopefully for one & all. I am a big fan of Derren Brown so I loved this. Steffan also incorporated the enneagram into his show with an explanation as to how this symbol works in our everyday life.

Began with a movie by John Amaral on Gurdjieff & Steve Jobs which created quite a stir, for & against the points made within it. What I got out of the movie was the intriguing fact that Jobs had read BTTHG & seen the movie version of ‘Meetings with Remarkable Men’. I admire Jobs for what he has done with Apple & have often quoted him or passed on his speeches to others but I am also very concerned about technology & what its impact is on our natural environment (just what are all those wireless energy waves doing to mother nature?).

The next talk by George Beke was to do with Pythagoras, Plato & the stars. It also included a tape recording of Gurdjieff speaking, which was a delight, I had never heard his voice before. I was reminded he was quite old at the time of the recording because his voice had not been what I had anticipated. This was a thrilling talk for me as I am an amateur astronomer & to discuss the stars & Gurdjieff’s advice that one should find that special point in the heavens to connect with . . . celestial connections were helping with the cerebral connections.

The next talk was from Irv Givot who introduced us to the first page of BTTHG. Another great talk & so much to say on just that first page. If we discuss page 2 next year, then page 3 the year after we should get to the end of the book within a couple of thousand years. Here’s hoping the conference goes on that long, but what was important from that talk was the invocation Gurdjieff makes on that first page, something we should be applying to everything we do.

Friday night was a delightful evening of Gurdjieff & De Hartmann music played for us by Linda Kangas & Christopher Barlow. I have heard such music on CD but to hear it performed live on the piano was a totally different experience & I could feel the music playing into my body. Go listen to it live for a true experience.

A couple of good talks in the morning, the first by David Brahinsky on Gurdjieff’s concept on sexuality in the evolution of consciousness (or sex energy). An interesting talk on how we misuse it along with a discussion on Reich & his views on orgiastic potency. Buffers cannot destroy sexual energy & misuse of it leads to sexual titillation. If we can use this energy productively it should help us in developing our being.

The next talk was by Russell Schrieber, another interesting talk this time on the explanations for negative energy & trauma. Sadly Russell ran out of time to give us the full speech so one feels a lot was missed.

The afternoon was two seminars, one on the Ekim Bey chapter in ‘Meetings with Remarkable Men’. I did not have the book with me nor had I read it in a long time so I was all ears on people’s interpretations of this chapter.

The second seminar was chapter 35 BTTHG. I thought I would use my kindle for this reading & was rather dismayed to see I had a different version to the paper book. Then a coincidence or synchronicity: at the reception I found a copy of one of Paul Beekman Taylor’s talks on the many versions of BTTHG & the many translations that were made under Gurdjieff’s watchful eye. They all still have the same meaning, just that some of the sentences are constructed just slightly differently.

Saturday evening was the banquet which was full of toasts, good humour, some bad jokes, good food & magic provided by Mr. Soule, of which I was lucky enough to participate in the grand finale.

Sunday was the last day & a final seminar entitled “Where do we go from here?” Well where do we go? With open minds & hearts we all look forward to next year, where the conference shall be held in the lovely site of Canterbury! Hope to see you there.

We welcome  your comments.